The Crommelin Comet reaches its closest distance to Earth, or its periapsis, every 27 years. Scientists have recently discovered a mistake in its orbital calculations and predict that it will collide with Earth in the year 2038! There is only one way to prevent this catastrophic event: destroy the comet. In order to complete this mission, four separate rockets full of explosives must be launched at it each time it approaches Earth. The last time it was close enough to do this was 2011. Fortunately we live in an age where time travel is possible and we can go back to the last four occurrences that Crommelin reached periapsis. Four brave scientists will leap between the years 1930, 1957, 1984, and 2011 simultaneously in order to destroy the deadly comet. A secret experimental rocket station built in 1929 while rocket technology was still in its infancy is their only hope. They must ensure the explosive cargo reaches it in time. The only consistent form of travel through these years is locomotive so they will build a rail in order to get the cargo to its destination. They have to be careful, though, because their choices in the past will affect the future. If they manage to build a rail for all four trains to the rocket station, all while repairing damaged tracks, and navigating around obstacles, then they can save the planet! If, however, any one of those trains falls off the tracks... we’re DOOMED. 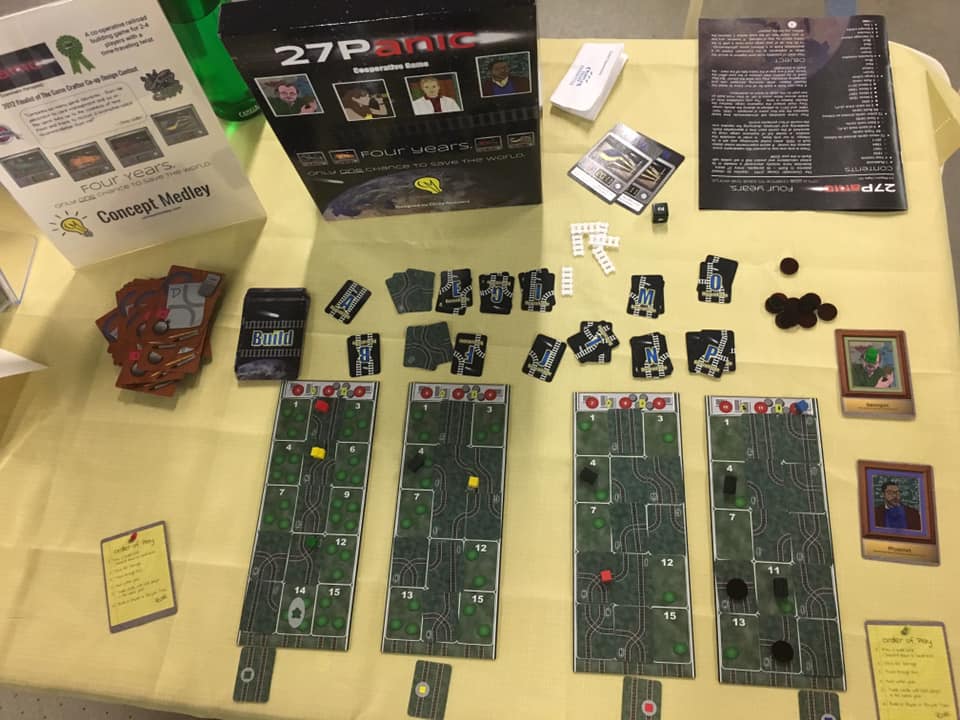 In 27Panic you play cooperatively as a team of scientists building a railroad track in four years simultaneously. You build tracks by playing cards and ones that are built in the past carry forward into the future. You must plan closely with your team in order to strategically build a path for explosive cargo to follow in each year. If you are able to get the cargo to a nearby rocket station in all of the years by avoiding obstacles and repairing damaged rails, you'll win the game!